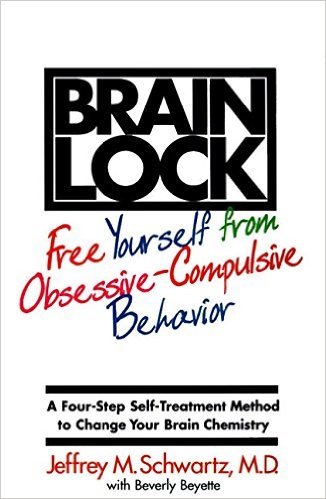 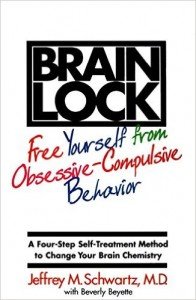 An estimated 5 million Americans suffer from obsessive-compulsive disorder (OCD) and live diminished lives in which they are compelled to obsess about something or to repeat a similar task over and over. Traditionally, OCD has been treated with Prozac or similar drugs. The problem with medication, aside from its cost, is that 30 percent of people treated don’t respond to it, and when the pills stop, the symptoms invariably return.
In Brain Lock, Jeffrey M. Schwartz presents a simple four-step method for overcoming OCD that is so effective, it’s now used in academic treatment centers throughout the world. Proven by brain-imaging tests to actually alter the brain’s chemistry, this method doesn’t rely on psychopharmaceuticals. Instead, patients use cognitive self-therapy and behavior modification to develop new patterns of response to their obsessions. In essence, they use the mind to fix the brain. Using the real-life stories of actual patients, Brain Lock explains this revolutionary method and provides readers with the inspiration and tools to free themselves from their psychic prisons and regain control of their lives.

Buy on Amazon or find at your nearest library.

This site uses Akismet to reduce spam. Learn how your comment data is processed.

This website uses cookies to improve your experience while you navigate through the website. Out of these, the cookies that are categorized as necessary are stored on your browser as they are essential for the working of basic functionalities of the website. We also use third-party cookies that help us analyze and understand how you use this website. These cookies will be stored in your browser only with your consent. You also have the option to opt-out of these cookies. But opting out of some of these cookies may affect your browsing experience.
Necessary Always Enabled

Any cookies that may not be particularly necessary for the website to function and is used specifically to collect user personal data via analytics, ads, other embedded contents are termed as non-necessary cookies. It is mandatory to procure user consent prior to running these cookies on your website.